A Legacy Worth Imitating

A Legacy Worth Imitating 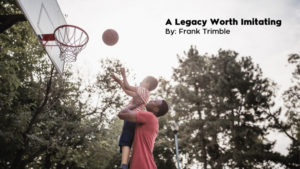 As a child of the 90s, I grew up in a great era of basketball heroes. I just knew that one day I would be slamming the ball like Shaq or confusing defenders with super-human dribbling skills like Iverson. Unfortunately, I’m only 5’9” and can’t jump very high. Although there are so many NBA all stars from that era worth talking about, one in particular rises to the surface…go ahead and say it…that’s right…MICHAEL JORDAN! I know there’s debate these days about who the G.O.A.T. is, but for folks that grew up in the 90s there’s no competition (sorry Lebron…).

Air Jordan led the Chicago Bulls to six championships and put up too many impressive stats to list here. I remember being amazed at what this guy could do, and I remain amazed to this day. His legacy is permanent and that permanence is partially represented by his statue which resides at the United Center in Chicago. “The statue itself measures 12 feet tall (17 feet from top to bottom) and weighs 2,000 pounds.” It isn’t surprising that one of the most famous athletes of all time has a statue, but it makes me think about the legacies that we as fathers will leave.

Have you ever seen a statue, a plaque, or a name on a building and thought to yourself, “What did that person do to deserve a permanent monument?” or “How much money did that person pay to get their name on the college student center?” Maybe you’ve attended the funeral of someone and wondered what people will say about you when you’re gone. What legacy will we leave?

Let me comfort you by saying that the best legacy you can leave for your loved ones and your community isn’t based on how awesome you are. You probably are awesome! However, the primary legacy you want to leave behind is a legacy of faith in Jesus.

Psalm 78:1-8 is a great passage to consider when thinking about the generational transfer of the Christian faith. At the beginning of the passage Asaph talks about the truths about God that were passed down to his generation. He then moves on to talk about the generation after him. Then he begins talking about the generations to follow. He even references the faith of the generations that weren’t even born at the time of writing! He is saying that God’s people are called to pass the truth of who God is, what He has done, and what we’re supposed to do with that information. This mission transfers to the generations after us because of God’s power working through our obedience today. What is the point of the transfer? What do we hope God will do?

so that they should set their hope in God
and not forget the works of God,
but keep his commandments;

and that they should not be like their fathers,
a stubborn and rebellious generation,
a generation whose heart was not steadfast,
whose spirit was not faithful to God.
Psalm 78:7-8

Dads, we are called to intentionally guide our families to continue the pattern that Asaph describes in Psalm 78:1-8. We want to echo what he says in verse 4:

We will not hide them from their children,
but tell to the coming generation
the glorious deeds of the Lord, and his might,
and the wonders that he has done.

All of this with the result of future generations setting their hope in God and not forgetting what He has done. How incredible would it be to worship in Heaven with your descendants that you never had the pleasure of meeting on earth? What if they are saved by grace and long to follow in the commands of God for flourishing? What if they avoid the sins of the wandering Israelites and the sins that are commonly attached to your surname? What if your obedience today could be a part of this process? That would be a legacy worth leaving.

In 100 years, people will probably still be talking about Michael Jordan. He’s a basketball legend! However, most of us will be completely forgotten by our own family members. Our own descendents will likely not even know our names (unless one of them really likes ancestry studies), and this should be comforting to us. The words of John the Baptist recorded in John 3:30 come to mind:

“He must increase, but I must decrease”

“Preach the gospel, die, and be forgotten”

Brothers, may the primary legacy we leave be one of faith in Jesus Christ that the Holy Spirit uses to see the gospel change the generations that come after us. We’ll likely not get a statue out of the deal, but our Master will be magnified, and we’ll get to spend eternity with family members who are then known primarily as brothers and sisters in Christ!