Honor Their Father and Mother

Honor Their Father and Mother 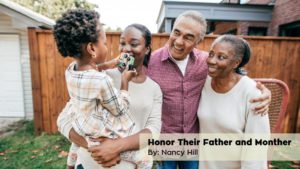 Remember me telling you that our middle daughter lives in Tanzania, East Africa, and it is from Africa where our grandparent names originated. Our Grands call us Bibi and Babu. My name is Bibi, which means Wise Old Women in Swahili, the language utilized along the east coast of Africa. Conversely, my husbands name is Babu, which means Wise Old Man. It was easy for me to glom onto Bibi because, after all, who wouldn’t want to be thought of as wise. Wise means, “In the know” or “having the power of discerning and judging properly as to what is true or right.”  A wise person is both respectable and respected.
From an early age, our Grands were taught by us and their parents that Mothers and Fathers are to be honored. God backs us up on this when he made Honor Thy Mother and Father the fifth of the Ten Commandments (Exodus 20:12). In this God tells our Grands to respect authority, which in turn helps to build strong families.
What does it mean to honor your parents?  It means speaking well of them and politely, showing them courtesy and respect. It also means to follow their teaching. In today’s culture parents and grandparents are often fighting an uphill battle once the children are exposed to more screen time and come across Apps like TikTok where parental respect isn’t always edified. Therefore, it is important for grandparents to back up the parents, always pointing to the importance of being kind, respectful and obedient to their parents.
One bible verse that really encouraged me when my children were young was Proverbs 22:6.  It says, “ Start children off on the way they should go, and even when they are old they will not turn from it.”  This verse reminds me how important it is to begin teaching children to be kind to others, to be respect authority and to be obedient from the get go. God reminds me that if I am faithful as a parent, then my children won’t turn away from these important concepts when they are older. Proverbs 22:6 became a linch pin for me and then for my children when they became parents.
I believe that grandparents have a special relationship with their grandchildren. It is important to use this relational platform to remind your grands, without lecturing, that God commands them to honor their Mother and Father. Thus, it is their duty to do so.
But, perhaps the best way to help your Grands honor their Mother and Father is to model this behavior. Don’t tell them how. Show them how by honoring one another. That is the wise thing to do.
Nancy Hill2022-10-17T17:03:50-06:00